Fantasy Springs Casino, Indio – In a crossroads junior middleweight clash, there were over 3,350 punches thrown (over 1,000 landed) in a phone booth fire-fight, where Jesus Soto Karass (29-13-4, 18 KOs) picked up his first win since 2013 with a ten round majority decision win over previously undefeated Neeco Macias (17-1, 10 KOs)

Coming in, Soto Karass had lost five of his last six fights. He went 0-2 in 2017 with a TKO defeat to Juan Carlos Abreu and a majority decision loss to Mauricio Herrera.

Macias picked up TKO defeats in his two prior outings in 2018, with a sixth round stoppage of Marvin Cabrera in September, and a two round TKO of Travis Hartman in March. 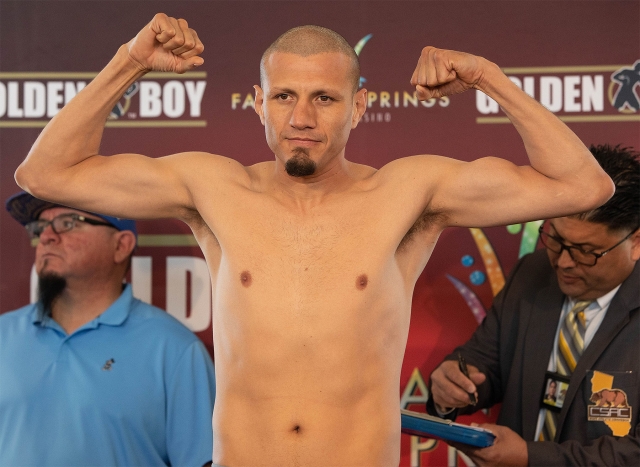 In the first round, Macias came right out and pressed Soto Karass against the ropes – with his style of non-stop punching. He would not allow Soto Karass to get off the ropes for the entire three minutes.

The second round was more of the same, but there was a clash of heads that opened up a bad cut above the right eye of Macias. It didn’t stop Macias from pressing Soto Karass back against the ropes – and still throwing a army of punches. Soto Karass was doing his best to cover up and block as many punches as he could.

During the third, Soto Karass began to find some openings and connected with a few good shots. He was still being heavily outworked during the round. The fourth round played out in a very similar manner, with Soto Karass landing solid punches and Macias kept coming with more non-stop combinations.

Macias was starting to slow down in rounds sixth, seventh and eight, as Soto Karass was starting to work his way back into the fight by fighting fire with fire by throwing a huge amount of punches and he was landing the harder shots.

They continued to trade, at close range, until the final bell. Macias never stopped throwing – and neither did Soto Karass, who landed the better punches down the stretch.

In the co-main event, Manny “Chato” Robles III (17-0, 8 KOs) of Paramount, California defended his NABF Featherweight Title against Jose Gonzalez (23-7, 13 KOs) of Guadalajara, Mexico in an intense battle that Robles won via split decision. Two judges scored the fight 97-93 and 96-94 for Robles, while on scores the fight 94-96 for Gonzalez.

“I could have done better tonight,” said Manny Robles III. “He was very awkward and hard to hit. I don’t agree with the decision. I felt I won by unanimous decision, but I’m happy we got the win.”

“It was tough fight and I could have done better,” said Emilio Sanchez. “When he came at me at the beginning of the fight, I decided to keep my composure and stick to the game plan.

“This was my first fight in 15 months,” said D’Mitrius Ballard. “I was off due to some outside issues, but I’m back. I was shaking off some ring rust, and after a layoff like that, I want to come back as soon as possible.”

Aaron “Silencer” McKenna (6-0, 4 KOs) of Monaghan, Ireland stopped Abel Reyes (4-2, 4 KOs) of Tamaulipas, Mexico in a six-round welterweight fight. The fight was stopped at 2:27 of the second round.

“I took my time in there because I knew this was a six-round fight,” said Aaron McKenna. “I’ve been working on my body shots. I got him clean and dropped him to get the win.”

Jordan White (5-1, 4 KOs) of Washington, D.C. defeated Cristian Renteria (7-7, 6 KOs) of Tijuana, Mexico via KO in the first round with a time of 3:00 of a featherweight battle originally scheduled for four rounds.

“I felt like a dog. I felt great,” said Jordan White. “I loved every aspect of this event. I like the body shots, but I can do a little bit of everything. I’m looking forward to coming back.”

Sanjar Tursunov (1-0, 1 KO) of Tashkent, Uzbekistan stopped Miguel Cubos (11-20, 8 KOs) of San Luis Potosi, Mexico in the second round via TKO with a time of 1:26 in a cruiserweight fight originally scheduled for four rounds.

“I’m very happy with my performance,” said Snajar Tursunov. “Thank you to Golden Boy Promotions for this amazing opportunity.”

We are the original Boxing Show to bring you the true fans' interest to the sport of boxing. This show was started on the idea of breaking away from the rumors, from the biased opinions, and bring you the conversations that real fans want. We bring Professional Boxers, Coaches, Managers, CEO's to the fans to give you an exclusive interview every episode to bring you a truly unique story from the source themselves. This is The Boxing Rundown.
Contact us: theboxingrundown@gmail.com
© The Boxing Rundown 2019
MORE STORIES